We had the pleasure of visiting Kartchner Caverns on Friday November 30th, 2018. Its hard to believe that 44 years ago, almost to the date in November, this cavern was just being discovered by Gary Tenen and Randy Tufts as they were exploring the limestone hills at the eastern base of the Whetstone Mountains. The two men dreamed of finding “a cave no one had ever found,” and indeed they found it. 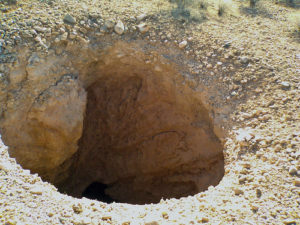 As we neared the Limestone hills containing the now well maintained, manmade entrance to the caverns, we had no idea what we were in store for as we approached the entrance. The hills themselves do not sit that far from the highway, and leave little to be awed by from an outward view. There is nothing that gives any indication to the incredible beauty that awaits under the surface, and once inside its mind boggling what it must have been like coming upon this treasure in such a dark exploration. Gary and Randy were two such souls that truly felt the significance of a place like this, and kept the cave secret until February of 1978, when they sat down to share the their find with property owners James and Lois Kartchner. The two knew the cave had to be conserved, since natural wonders can seriously be damaged from unregulated usage, and a course of action was set into motion to approach Arizona State Parks about acquiring the caverns. 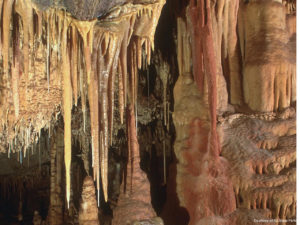 It’s hard to believe as you look over at the original entrance, which is hardly noticeable, that a small, dark, hole into the earth, leads to such magnificent beauty in what lays beneath. Our ranger guide was very informative, as was everyone working at the park, and you could feel the passion in his sharing each step of the way as we entered the tunnel to the caverns. 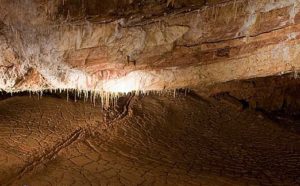 It was sunny yet very chilly outside, and as you approach the first door, you see the beginnings of tunneling into the hillside. The park takes great lengths in precaution to preserve the still actively growing cave, listing many helpful ways in which we will be walking into the cavern as to not disturb what has taken hundreds of thousands of years to form. 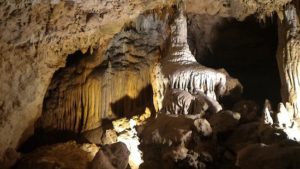 Upon walking through the first door, immediately the temperature is a comfortable 72 or so degrees, humid, and surprisingly pleasant. We pass through long tunnels painstakingly made for easier access into the caves, and a total of three large metal doors, sealing the outside world, and preserving the inner one. 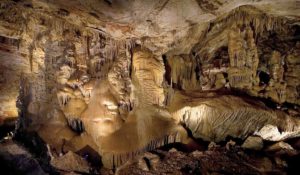 Kartchner Caverns is one of those rare places on earth that brings you to a place deep within yourself, thats hard to comprehend the amount of time, pressure, and gravity of circumstances to create. Gary and Randy crawled, through a tiny black opening, squeezing, moving, exploring the darkness, until it opened into something ancient, magnificent, leaving a legacy of awe to what others might share. The beauty is remarkable, even more so as you realize the process in discovering it, and the truth which made it.

I found myself feeling into my own journey as we walked, those dark places yet to be discovered, and the ones that have revealed themselves through much crawling, squeezing and exploring in great effort. The ranger that took us in remarked, “its hard to believe this much beauty formed over so much time in such darkness.”

Many times in our journey it’s difficult to view our own darkness with such reverence — mostly because we get caught up in those tight places, grasping for movement, trying to reason our way through tiny limitations, when being human is really all about feeling those closed spaces. As we allow ourselves to abide with the dark, seeing past the tiny openings, our desires guide us into something much more than we could ever have hoped for. 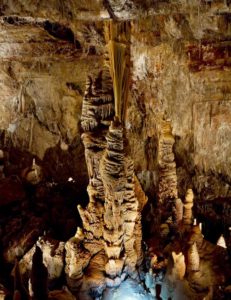 When we are ready, may we find our ‘sink hole,’ beginning the long journey inward to see what has been forming for a very long time. May we crawl, squeeze, move at our pace, allowing ourselves to enjoy each exploration with love. And as we come to know the one we have been waiting for, may we greet ourselves with all the tenderness we have long desired, for the benefit of all beings.