The thunder in our steps (North Carolina Maritime Museum)

Not long ago we had the opportunity to visit the North Carolina Maritime Museum in Beaufort, NC. One of the latest exhibits was due to the find of Blackbeard’s ship, Queen Anne’s Revenge off the North Carolina coast where it went aground in 1718.’ Nearly 300 years after the pirates’ death, Blackbeard remains one of the most notorious rebels of the high seas, inspiring tales such as Treasure Island, and in more recent times movies such as the series Pirates of the Caribbean. And although there is a mysterious shroud surrounding the details in the path of piracy, many of those who chose to become pirates including Blackbeard, saw themselves as a social caste in revolt against a system which employed unfair treatment to those in it. Once committed to a life of rebellion on the high seas, ships were reorganized in social structure to provide very little power to the captain, instead electing or relieving him as necessary by the consciousness of the vote. And pirate vessels were one of the few places where slaves could gain freedom, which according to accounts a large portion of Blackbeard’s crew were of African origin. 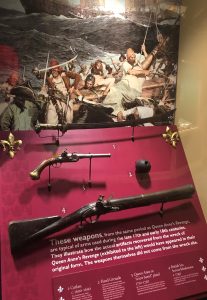 Although Edward Thatch or more commonly known as ‘Teach’ was a tall slender man, his terrifying countenance was achieved when boarding a ship by the many lit fuses under the brim of his hat and in his black beard, which created an eerie essence along with the sling carrying several pistols and sword in hand. And despite his reputation he was remarkably judicious in his use of violence, as various eyewitness accounts claimed, he killed no one when boarding prior to his death in battle with the Royal Navy. Many Merchants simply surrendered without firing a shot, both witnessing his appearance and the small army that followed him as they were overwhelmed. At one point Blackbeard and his crew even settled in the small town of Bath, attempting to live out ‘normal’ lives, but eventually the life of piracy would draw them back to the sea, calling for something more than ‘settling’ could offer. And the image as a killer which was created by authorities to gain both public support for his demise, would not only resolve any of his misdeeds, but quell any future would be attempts at rebellion by setting an example. 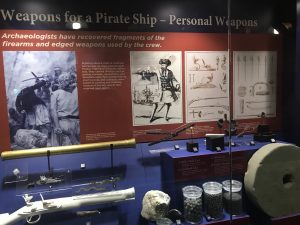 Throughout our life path many of us will try to appease the demons that surface, doing our best to fit into the societal structure we live in, sweetening the day with our words, and hiding the doubts that may present themselves in our circumstances, but in the end our nature will expose itself in the innocence of who we are if our darkness is left unanswered. There is thunder in our steps, a radiant impression we leave in signature upon the earth as we walk in pilgrimage here, and even though who we are here may be tossed about on a sea of doubt, our thoughts, feelings, and desires will only continue to surface until they are acknowledged. The power of our divinity in human form wants to be birthed, reconciled, and expressed, which is why we may turn to desperate measures in order to bring our attention back to what the soul is asking for.

Today may we relax into our steps, feeling the ground shake beneath our feet, that the one we already may emerge in godhead, as thunder resounds in the heart of our answering. May we hold fast in dark places, allowing our innocence to guide us, and rather than rebellion, create the sacred space of our birth we have come to experience here in earth. And may we choose a free life rather than the stability of servitude to a system of impermanence, proving the ground we walk on by the love we offer, for the one who only desires to come forth in benefit of all beings. 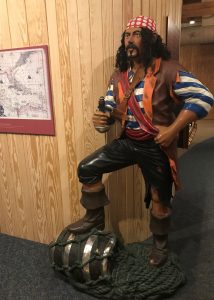